Aug 31, 2010 Dear all, Maybe someone can tell me where I can download a demo-version of SDL Trados 2007 Suite Professional (not the freelance version). I bought a license at a special price (officially - long story) but received only the activation code. That's no problem with Studio, which just added several functions after activation, but there seems to be a special Professional version for the Workbench. At least my existing freelance version did not just switch over to professional mode. Thanks in advance.

With PROMT Professional 9. Web sites, or emails. You can also create corporate databases of translations of similar documents (for example, contracts or manuals.

Double-click the SDLTrados2007SuiteFLSP3863Patch.exe file and follow the instructions on the screen. Note: The patch installer requires the installation files from the original SDL Trados 2007 Freelance or SP1/SP2 releases to be available during the installation process. These files have the extension.msi. By default, the original release keeps these files on your system in a temporary folder (%TEMP% SDL Trados 2007, where%TEMP% resolves to C: Documents and Settings Local Settings Temp by default on Windows XP).

Exit all applications on the machine where SDL Trados 2007 Suite Freelance is to be installed. Also close Microsoft Word and any related applications (such as Microsoft Outlook). Double-click the SDLTrados2007SuiteFLSP3863.exe file and follow the instructions on the screen.

(SP3) This release features a new plug-in connecting Translator's Workbench with SDL's Automated Translation Server on the Web for the draft translation of new segments (no matches). When this feature is active and there is no 100% or fuzzy match available for a segment, Translator’s Workbench will contact the SDL Automated Translation server and provide an automated draft translation for the segment. This feature is available as a Beta version and supports the following language pairs: English-Dutch/Dutch-English, English-Chinese (PRC), English-Chinese ( Taiwan), English-French/French-English, English-German/German-English, English-Italian/Italian-English, English-Norwegian, English-Portuguese/Portuguese-English and English-Spanish/Spanish-English.

Target segments are no longer marked as Gaelic ( Scotland). Important: Before applying the patch, all legacy translation memories using Gaelic ( Ireland) or Irish ( Ireland) must be exported. You then need to recreate your translation memories in SDL Trados 2007 Freelance SP1/SP2 and import the TMs back before using this version of SDL Trados 2007 Freelance SP3. (SP1) Translator's Workbench no longer crashes when analyzing Word files with fields that do not have any field codes.

For more information on these new plug-ins, refer to the updated TagEditor online Help and the Translator's Workbench User Guide. For backwards compatibility reasons and ongoing projects, the previous versions of the QA Checker and the Microsoft Word spelling checker plug-in are still provided. (SP1) The Translate to Fuzzy command in TagEditor build 822 no longer runs more slowly than in TagEditor 7.5 (as shipping with SDL Trados 2006).

(SP1) When opening a segment, the source and target fields are now always auto-scrolled to the middle of the application window. (SP1) When starting Translator’s Workbench from TagEditor, the Server Busy dialog box no longer appears on slow machines. (SP1) The Find and Replace dialog boxes in TagEditor no longer have a character limitation of 41 characters. (SP1) The TagEditor application no longer crashes when a file is closed from the View tab. (SP1) The em-dash character is now preserved in TagEditor when working on Microsoft Word documents.

Previously, the em-dash was converted to an en-dash in both the target file and the translation memory. (SP1) TagEditor no longer crashes when using the Generic Tag Verifier for PowerPoint documents with spaces or other characters after the final tag on a slide. (SP1) You can now allow white print on a black background in TagEditor, by activating a color scheme override mechanism which is activated by a registry key. This may be of benefit to visually impaired users. For more information on this, contact your support representative.

The Check capitalization of initial letters and Check consistency of global capitalization options now correctly pick up capitalization differences between source and target segments. QA Checker no longer intermittently displays a blank dialog box when clicking on the Properties button in SDL Trados TagEditor. Likewise, issues with the options on the Segment Verification tab have been addressed. The numbers check in QA Checker has been improved. Occurrences of run-time error 91 have been addressed.

This issue does not occur when using the plug-in with earlier versions of Microsoft Word. New in SP2/SP3: Snippet Markup Plug-in 1.0 The Snippet Mark-up Plug-in 1.0 allows users to convert parts of CDATA-based text embedded in XML files to internal tags so that they are not included in translation. For example, it is possible to mark embedded HTML in CDATA elements in XML files as internal tags, so that the embedded HTML code is not treated as translatable text. For more information on the Snippet Mark-up plug-in, refer to the updated Translator's Workbench User Guide. Fixes and Enhancements in File Format Support A number of fixes have been implemented for various file formats as described below. New in SP3: Support for BroadVision QuickSilver 3.0 SDL Trados 2007 Freelance SP3 provides support for BroadVision QuickSilver IASCII documents in SDL Trados using S-Tagger for Interleaf/QuickSilver. Both new IASCII versions 8.5 (as created by the original QuickSilver 3.0 release) and 8.6 (as created by QuickSilver 3.0 after the April 2008 patch release) are supported.

If you still require support for MIF 7.x, please contact your support representative for a solution based on earlier SDL Trados S-Tagger releases that we can make available upon request. Additional Fixes for Adobe FrameMaker 8.x 1. (SP3) SDL Trados 2007 Freelance SP3 contains all hot fixes for SDL Trados S-Tagger for FrameMaker published after the SP2 release. For more information on these issues, consult the SDL knowledge base. Additional Fixes for Adobe FrameMaker 7.x 1.

(SP3) SDL Trados 2007 Freelance SP3 contains all hot fixes for SDL Trados S-Tagger for FrameMaker published after the SP2 release. For more information on these issues, consult the SDL knowledge base. 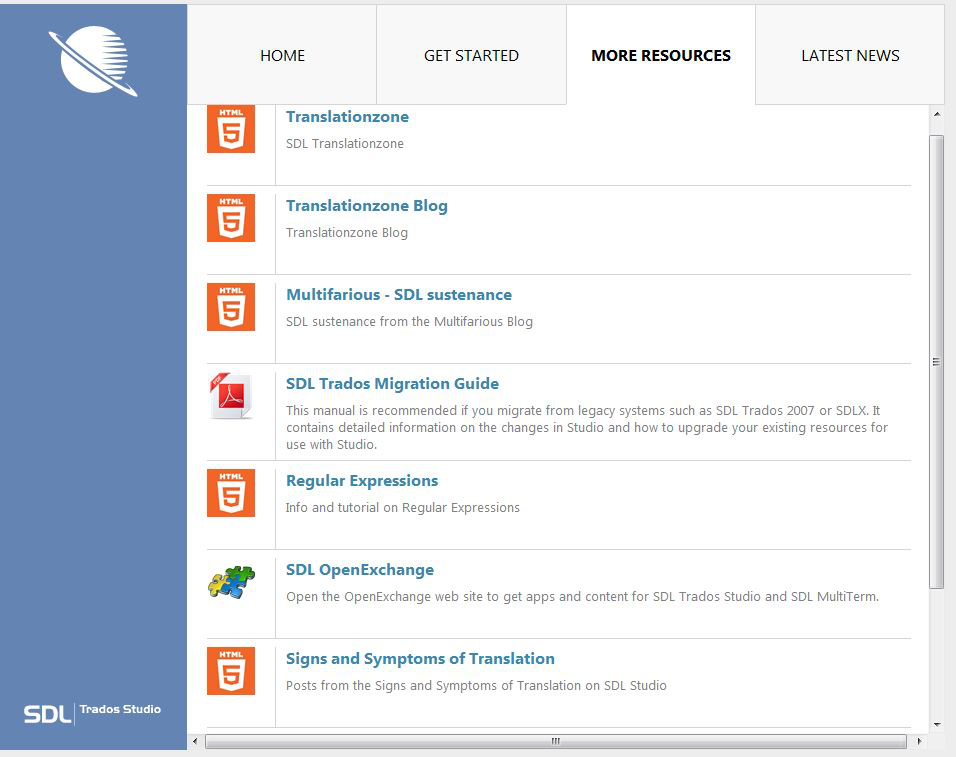 Additionally, the following fixes have been implemented for the Adobe InDesign CS2/CS3 file format (INX): 1. (SP3) SDL Trados 2007 Freelance SP3 contains all hot fixes for InDesign CS2/CS3 published after the SP2 release. For more information on these issues, consult the SDL knowledge base. (SP2) Certain types of image no longer disappear when converting files back to INX format. (SP2) The number of internal tags has been reduced by moving the default character format information into the external paragraph tag.

(SP1) Saving certain INX files as target no longer results in the error 'Resource tag with ID ' has been inserted or modified at Control ID 'document'.' (SP1) Errors no longer occur during backward conversion for Notes, Nested fields, Non-breaking spaces, Discretionary line breaks and text variables. (SP1) Index entries with quotes in the INX file are now retained in the translated INX file. (SP1 and SP2) A number of other forward and backward conversion issues have been fixed. New in SP2: Support for QuarkXPress 7.x via the Third-Party QuarkXPress Plug-in CopyFlow from Napsys (www.napsys.com) QuarkXPress 7 files, including Unicode encoded files, are now fully supported in both SDL Trados and SDLX through the third-party application CopyFlow from Napsys. For more information on CopyFlow and special offers for SDL Trados users, see.

Microsoft Word Support in TagEditor Using earlier versions of SDL Trados and translating Word documents into Arabic in TagEditor, where you had target Arabic segments with Western text included in the segment, the Western text was moved out of its correct position to the far right-hand side of the segment in the back-converted target document. This has now been corrected and Western text is now put into the correct position in the target segment. Microsoft PowerPoint 2000, 2003 and XP Support for Microsoft PowerPoint files using the new PowerPoint filter has been enhanced.

In addition to this, a number of issues have been addressed in SP3. Filter Settings Application A number of fixes have been implemented in the Filter Settings application, allowing users to alter filter settings for each file format in a more robust fashion. Also, the settings for the Java Virtual Machine size can now be set from the Filter Settings application. (SP3) It is now possible to choose Word 2007 (.docx) and PowerPoint 2007 (.pptx) files for alignment purposes; it is no longer necessary to save such files in the previous formats (.doc and.ppt). (SP2) File types in WinAlign are no longer inconsistent between the General tab and the Files tab. (SP2) UTF8 encoded HTML files without meta tags now display correctly in WinAlign.

(SP1) Changing to Daylight Savings Time no longer affects WinAlign projects. Previously when you applied DST settings, WinAlign projects were not recognized as being complete and alignment work had to be redone.

(SP3) Issues with AutoMatch crashes have been addressed. (SP2) SDLX now supports Adobe FrameMaker 8.0 MIF documents, Adobe InDesign CS3 documents and QuarkXPress 7.x documents (converted by CopyFlow from Napsys). (SP2) The interface between SDLX and remote MultiTerm termbases has been made faster and more robust. (SP1) Support for working with Trados-based filters, such as the Microsoft PowerPoint or Word filters, has been enhanced and issues addressed.

(SP1) Hyperlinks in RTF files are now treated correctly in SDLX. (SP1) There is now an option on the Analysis tab to specify whether or not you want to perform analysis when creating a project. (SP1) The HTML filter has been re-added to complement the filter for Web-based formats.

(SP1) In earlier versions of SDLX, t he gluing function only glued files with an XML declaration in the header. However, if there was no XML declaration in the XML file, there was no warning to tell you that the files had not been glued and in the gluedxml.txt which was generated, it stated that all files had been glued. This has now been changed to allow the XML filter to search for XML Glue keywords to identify the start and end of each document. Also, if you glued files that originally contained script, then the word counts were inaccurate. This has been changed so that files that have been flagged as “do not process” are not glued. (SP1) Interaction with MultiTerm: changes have been made to reduce the time it takes to open the MultiTerm mini browser in SDL Edit.

Previously, all terms were checked (e.g. Correct source and target index) when the browser opened. These checks now occur when you navigate from one term to the next. Updates to SDL Trados 2007 Suite Freelance Documentation 1.