Product Information Cabela's Big Game Hunter: Trophy Bucks has you gunning for deer, fowl, rabbits, and other anxious animals in authentic outdoor locales across North America. Eleven species of deer can be tracked across varied terrain, including Desert Mule Deer, Sitka, Rocky Mountain Mule Deer, Columbian Blacktail, and Whitetail. The Sonoran Desert and the Yukon Territory are a few of the destinations you'll visit while being whisked away to 24 specific hunting regions as part of a 96-mission Career Hunt. Unlike traditional hunting games, Trophy Bucks includes a number of arcade-style enhancements to appeal to a wide range of players.

Features hunting across 24 states Game Series Cabela's Big Game Hunter Series. Is THIS the best they can do????? A - You can't just load on your computer and play when you feel like.

You've got to have the actual disk in your CD/DVD drive. B - You have to work your way up thru level (I guess they would be called) of tasks I'm just not interested in. Player-controlled game options are practically non-existent. C - I'm NOT interested in hunting turkeys, partridge, etc. I just wanted to pick a deer, elk, etc., hunt, choose where and with what, and get on with it. I just couldn't figure out how to do that with this game. 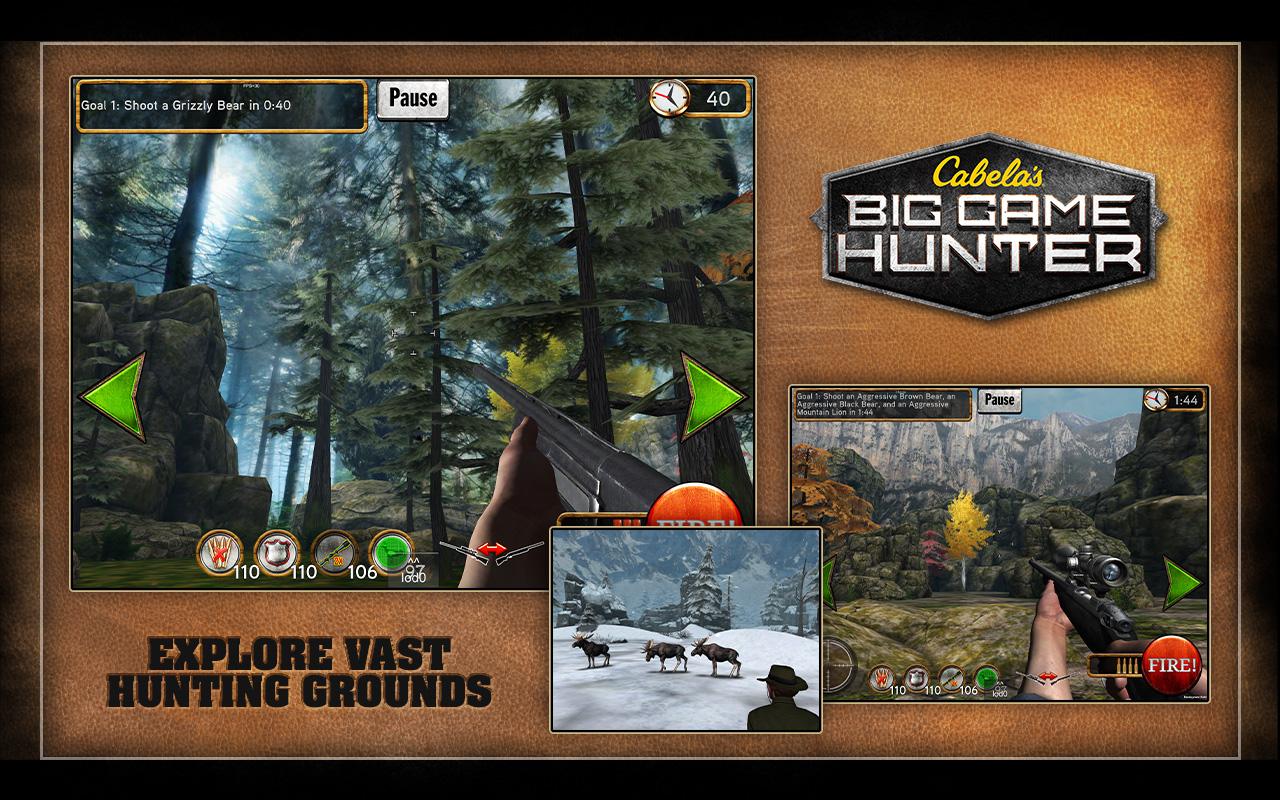 Games branded with the Cabela label are typically cast aside by the bulk of the gaming world for being oppressively slow, boring, and maybe even slightly mean for their extreme prejudice against the slow-witted, totally defenseless wild life of the world. The games range from extreme simulations where your hunter would sit in a treestand for hours on end in hopes that the one prize buck strolls haplessly by, to other Cabela games that feature you fighting an actual yeti complete with the ability to use bullet time.: Trophy Buck - a sort of titular amalgam between Big Game Hunter and Trophy Bucks from the consoles - attempts to bring players the best of both worlds, whether it succeeds is another matter entirely. Rather than going with the usual slow-paced gameplay that other Cabela games have used, Trophy Buck decides to simplify things a bit, while at the same time trying to inject some excitement into the play experience. The game does this by giving players a set of power ups that are awarded for nabbing a prize buck or nailing the perfect one-shot kill.

These power ups range from heat vision that looks like it's straight out of Predator to slow time which blurs the edges of the screen in the game's most stylized visual effect. The gameplay isn't nearly challenging enough to actually require you to utilize the power ups so they feel much more like a needless additive than a necessity to success. Hunter's Sense at work. But what is every Cabela game really about? Killing the most helpless, majestic animal you possibly can. While Cabela certainly lets you do this, the act of killing a five-star (the best in the game) buck doesn't quite feel as satisfactory when you realize that you're running over a small hill as you pull the trigger. It's sort of like playing a first-person shooter with truly mindless enemies.

To make matters even less realistic there's the Hunter's Sense ability. It's not a power up so you can use it as often as you like, and because of that it nearly breaks the game entirely.

By pressing T (by default) players are given targets over all of their future prey. Whether they're behind a tree, a mountain, under dirt, wherever they are, you'll be able to see them and, more importantly, shoot at them.

That means that fleeing deer are never safe, they could be running through a thick forest in hopes of finding safety, only to have you use Hunter's Sense and pick 'em off from the distance. There were several times when I never even saw my actual target, I just used Hunter's Sense and started firing.

At most this ability should have been governed for thirty seconds of use per hunt, rather than at the player's whimsy. The biggest problem with Trophy Buck actually isn't the power ups or Hunter's Sense, in fact the act of hunting the range of animals - you'll stalk deer, geese, ducks, bunnies, and even squirrels - is pretty fun, but it's the overall technical shortcomings and inadequacies that ruin this game. Try maneuvering through the environment, something that you'd think would be easy. After all, you're just walking for crying out loud. Sadly you're constantly maneuvering around invisible barriers that not only make the playable area claustrophobically small, but they also make it annoying to do the simplest of tasks. Luckily fleeing animals will occasionally get stuck on these barriers too, making it all the easier to plant lead in their side.

Then there's the design of the single mode of play, Career Hunt. That's right, no arcade mode or multiplayer of any kind to be found. Despite the combination of names, Big Game Hunter 2008: Trophy Buck is nothing more than a port of the console version of Trophy Bucks and features no elements from the newly released Big Game Hunter. Now back on the topic of games modes: Career Hunt has absolutely no continuity to it. You are randomly warped to different hunting spots within a state until you clear it. There's no how close you are to completing a state, no graphic that pops up telling you that you've completed a state, and now that there's no achievement pop-ups (as there were on Xbox 360) there's really no way to tell when you've completed a full section of the game.

When you do complete a stage (not a full state, just a stage) you'll be given a gold, silver, or bronze medal depending on what kind of a score you achieved, but there's really no incentive to getting a gold medal on a stage. You don't get any fancy new guns or attachments, just a shiny gold medal to call your own. Other mishaps within Big Game Hunter 2008: Trophy Buck include a graphics engine that brings respectable looking trees but forgets how to render just about everything else in the game.

Every other texture is either muddled, bland, or just plain bad. The game runs fairly smooth, but we were using our powerhouse Alienware computer with settings put to the max. Other machines might have to dumb things down a bit, and for that we are sorry given the rugged look of BGH 2008: TB on our rig. If you have all the money in the world and are starved for some good old fashioned deer, duck, and turkey killing then feel free to pick up Cabela's Big Game Hunter 2008: Trophy Buck.

The game has a sliver of fun underneath its technically defunct outer shell, but only diehards of the hunting genre will want to take the time to find it, and even then, it will likely be too arcade-like for their diehard playing habits. BGH 2008: TB (greatest acronym ever?) isn't an atrocity, but it's not exactly a showcase for what a hunting game can bring to the table.